San Sebastian (known as Donostia in Basque) is an upscale tourist destination in Europe, famous for its gorgeous beaches, fashion, and annual star-studded film festival. But it’s best known for a different kind of star. The almighty Michelin. San Sebastian is home to more Michelin stars for square meter in the world. 16 stars to be exact, making it a culinary Mecca for professional chefs and amateur foodies alike.

Among the sea of stars, Arzak holds three of them, and is unarguably one of the greatest restaurants in the world.

Having said that, there was no chance in hell we were going to go to San Sebastian without having an 8-course meal and wine pairing at Arzak.

This would be my first time dining at a 3-star restaurant so I didn’t know what to expect, although I did have flashbacks of attending stuffy dinner parties in my past where I’d have to sit up straight the whole time, talk quietly amongst those sitting next to me, and get bitch slapped if I spilled red wine on white linens. Just kidding, I never got slapped. But the thought of Juan Mari Arzak smacking my hand with a wooden spoon did come to mind.

—Side note — We were on an open-ended trip so we didn’t make reservations to Arzak until we got to San Sebastian in mid-June. We had tried to make reservations for that Saturday and were in a panic because their restaurant would be closed for a month for R&D (or vacation) after that weekend. Luckily, there was a cancellation for Thursday and we were slotted in. If you want to go, make reservations well in advance. If someone hadn’t canceled, we wouldn’t have been able to experience this at all.—

The food at Arzak was spectacular, innovative, and nothing short of extraordinary. The father/daughter team, Juan Mari and Elena Arak, combine old traditions with a modern twist, taking flavors and textures to a new galaxy entirely. In addition, we informed them ahead of time that we were both gluten-free so they made sure to accommodate us and make the necessary modifications.

If you need me to further twist your arm further to convince you why you should go to Arzak, I can do that. How about some visual stimulation? Here are photos of our 8-course meal.

Starting with the amuse bouche.

Chorizo with Tonic – served on a crushed soda can. Only the Arzaks can make recyclable trash look so appetizing. 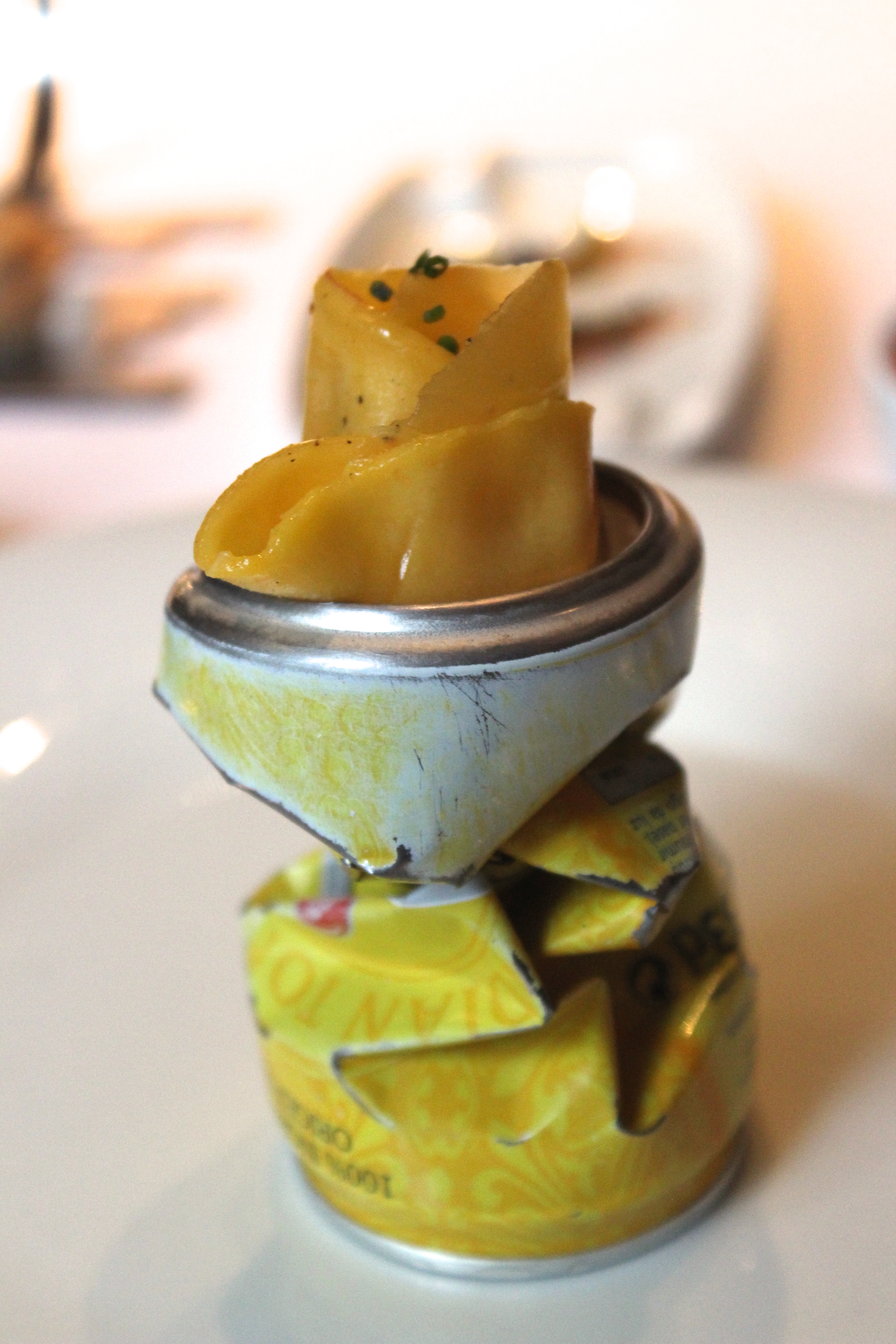 Sweet Chili Pepper an Sardine Sphere – Crunchy on the outside and just kind of dissolves in your mouth. 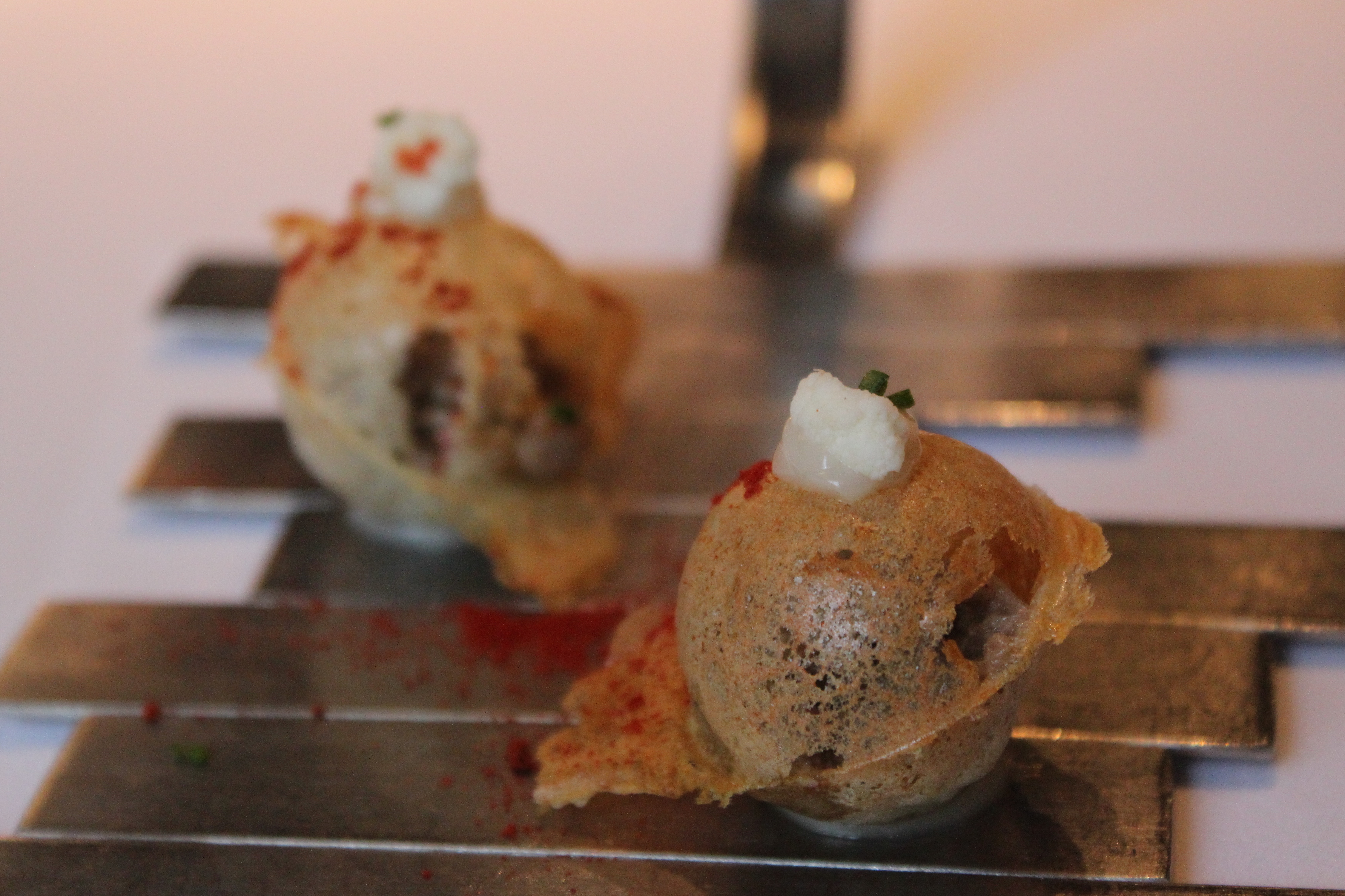 Gilda with Carrot and Ssamjang. I had to consult the Google for what ssamjang was and it’s a spicy Korean dipping sauce. 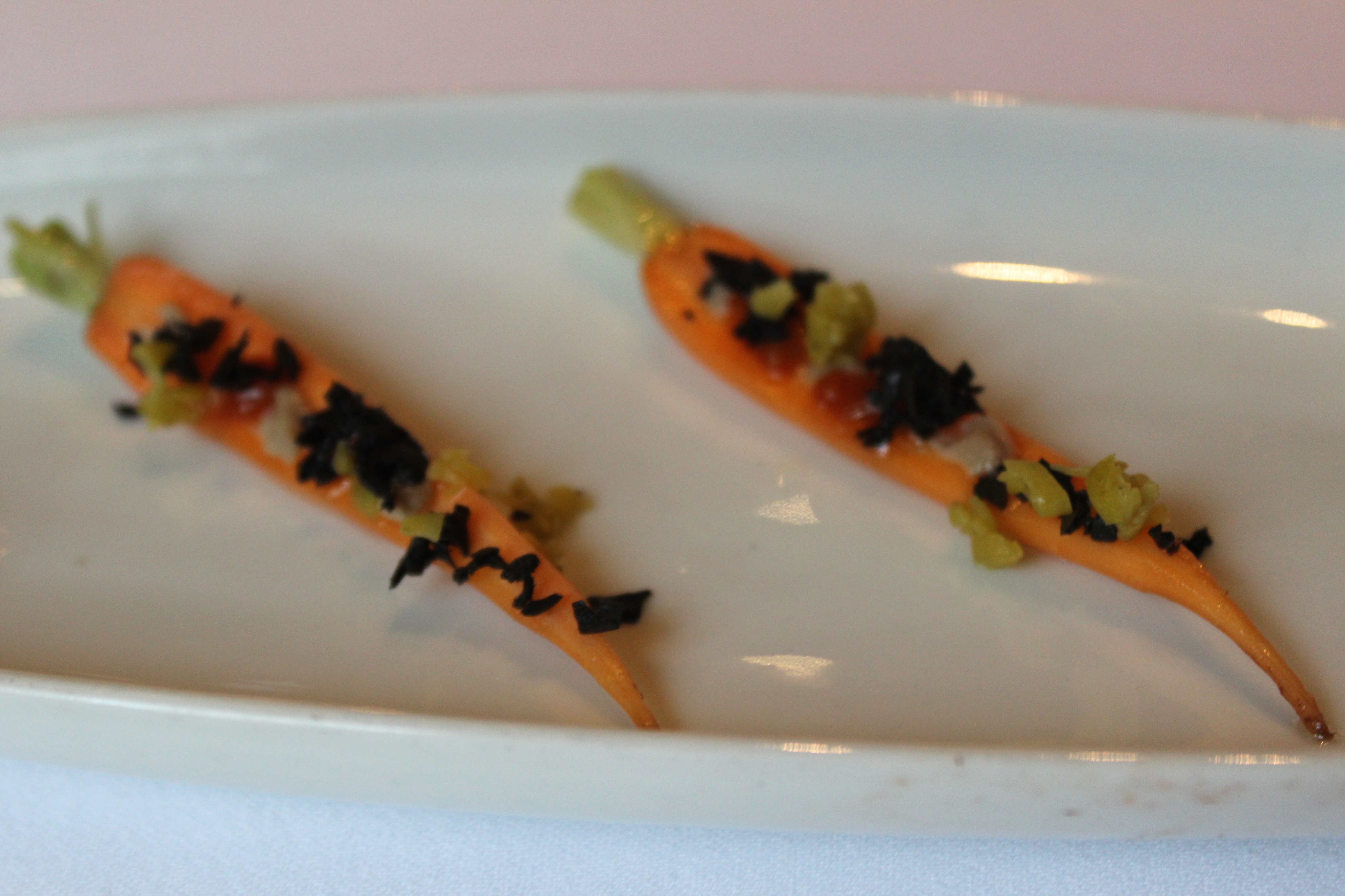 Cromlech, Manioc and Huitlacoche – Amazing. It reminded me of a fried dumpling but kind of just dissolves in your mouth.  A bit indescribable but delicious. 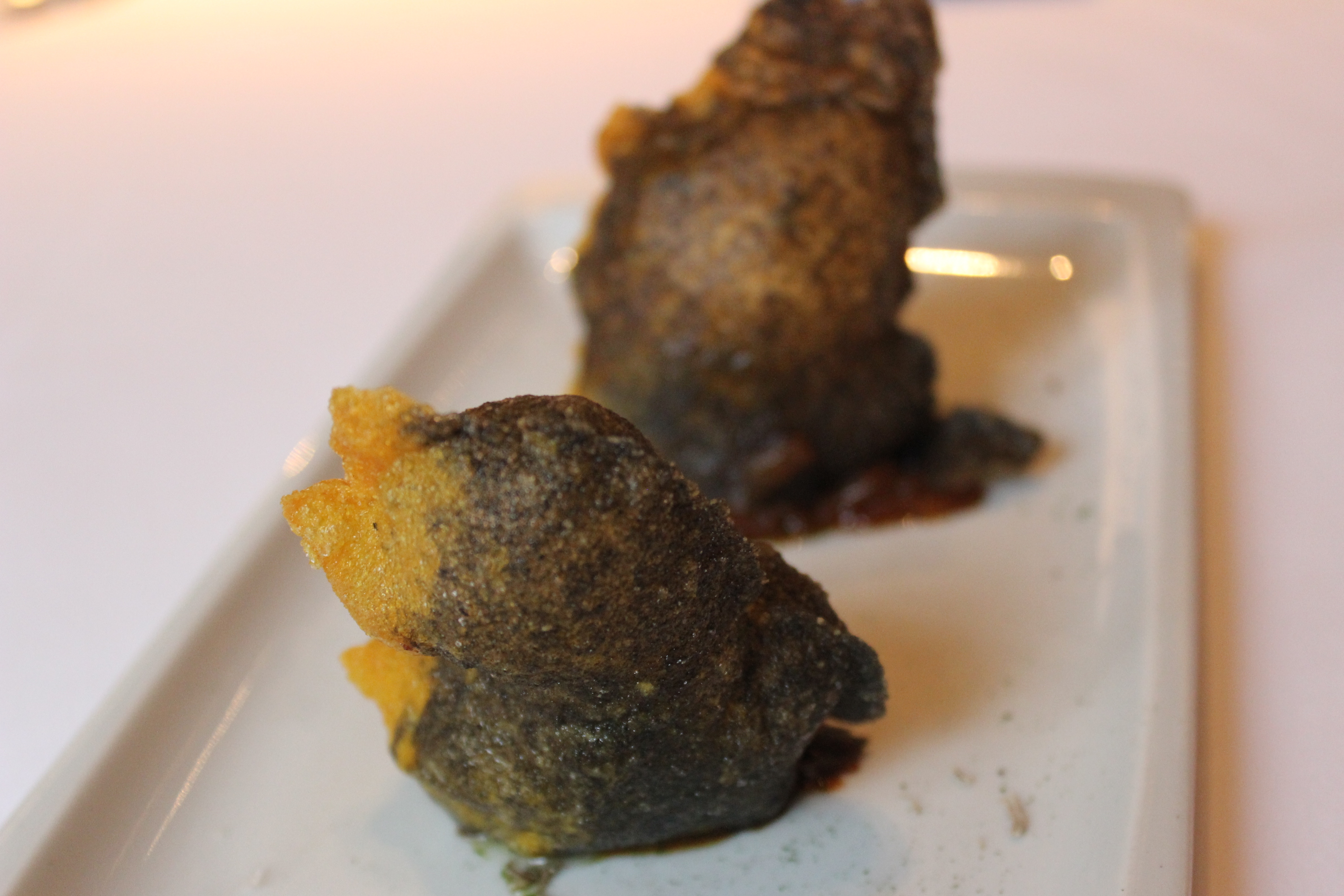 Ovo-lacto. Basically a cheese platter that looks like ham and eggs. 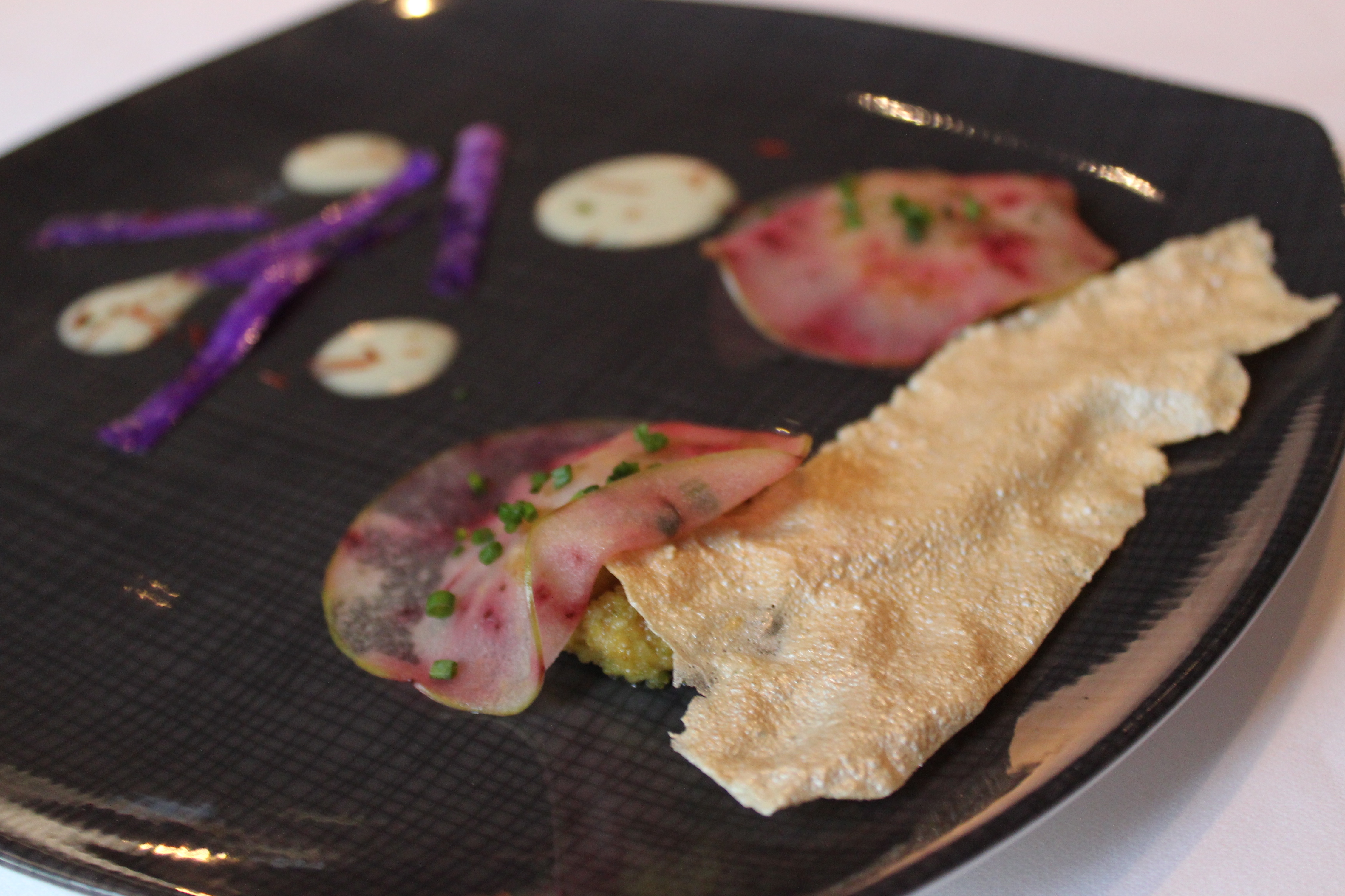 Fish Steak with Potatoes – Fillet of Sea bass lightly marinated with gin and served with several flavors of potatoes. The dish was served on a tablet, so you get a visual of waves crashing onto a rocky cliff while you eat. It’s as if the sea bass was jumping from the water into your mouth. Ok, maybe not like that, but close. 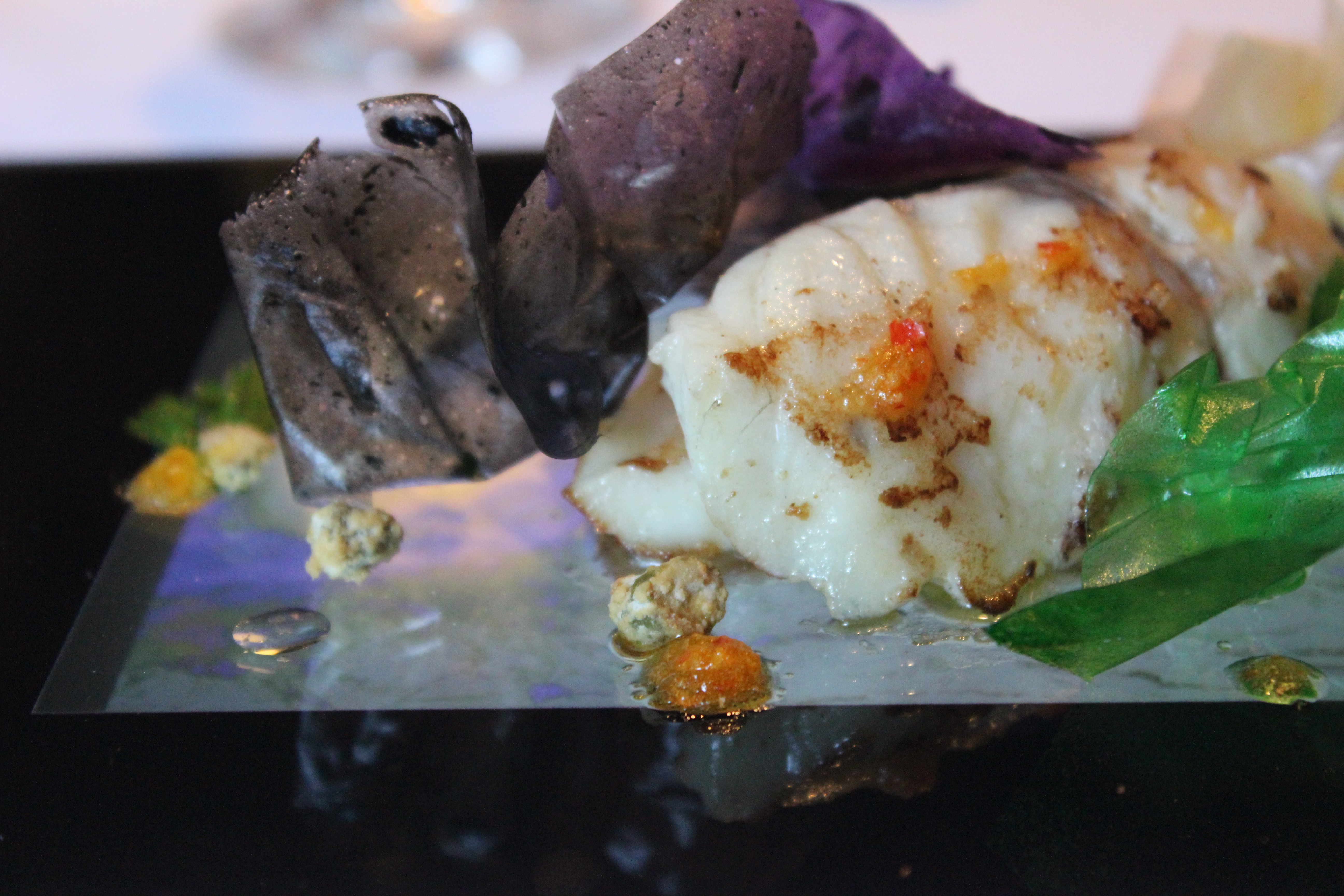 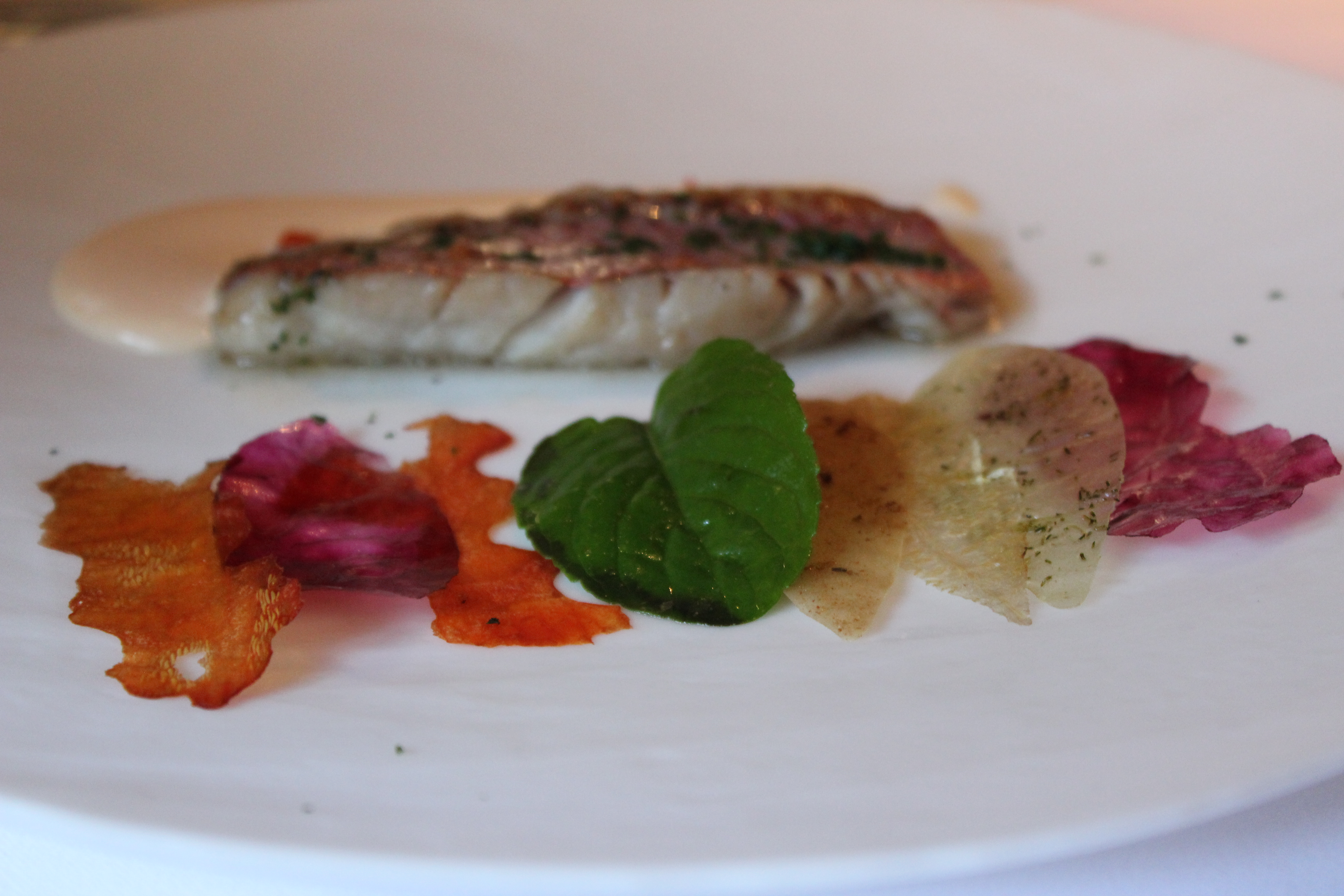 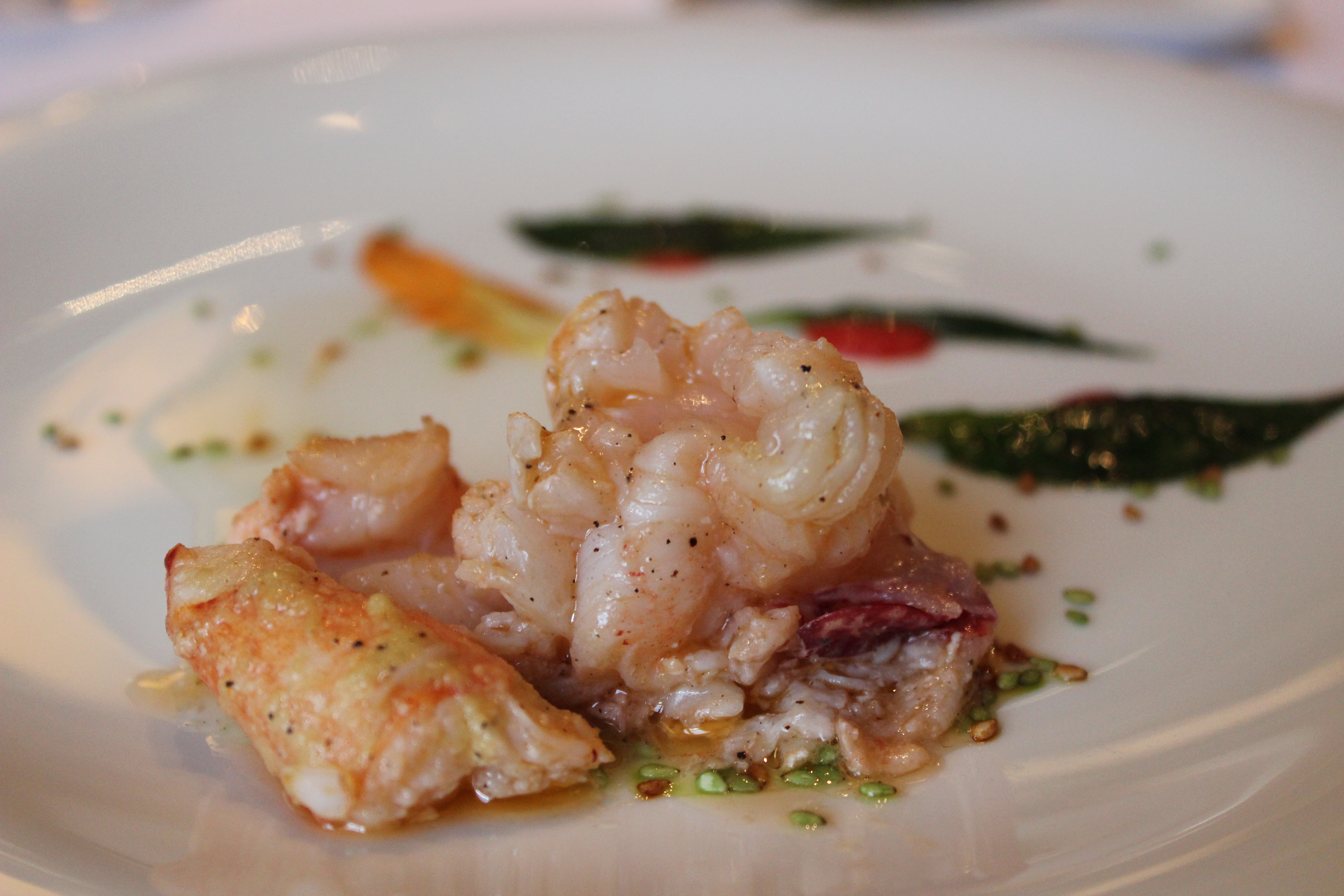 Before we dove into dessert, we asked our sommelier if we could meet the chefs. He told us that Juan Mari had left but took us downstairs to meet Elena Arzak, who was kind enough to come out of the kitchen for a photo. She is so beautiful and awkward…and I am totally obsessed with her. I mean, come on. She’s the best female chef in the world.

After talking about the fantastic meal and what we cook at home, she realized our love for food and took us to the kitchen where we got up close and personal. 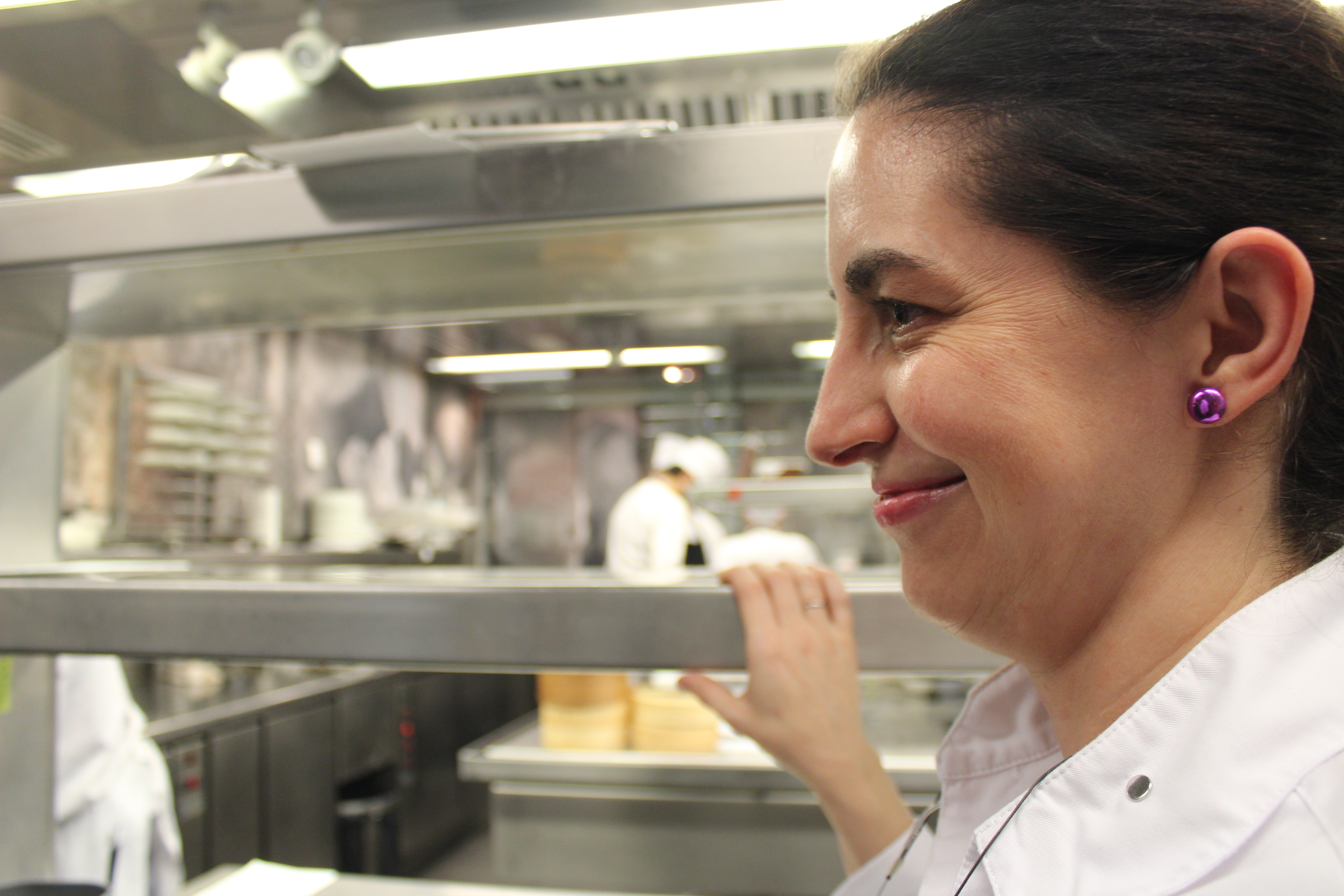 She showed us these amazing black Persian lemons and then got super excited telling us how she wanted to create a dessert that mimicked the lemons and which could be completely edible. We’ll get to that dessert in a second. In the meantime, can I just tell you again how much I’m obsessed with her? She’s so inspiring and I can relate to her: we both love to play with food. 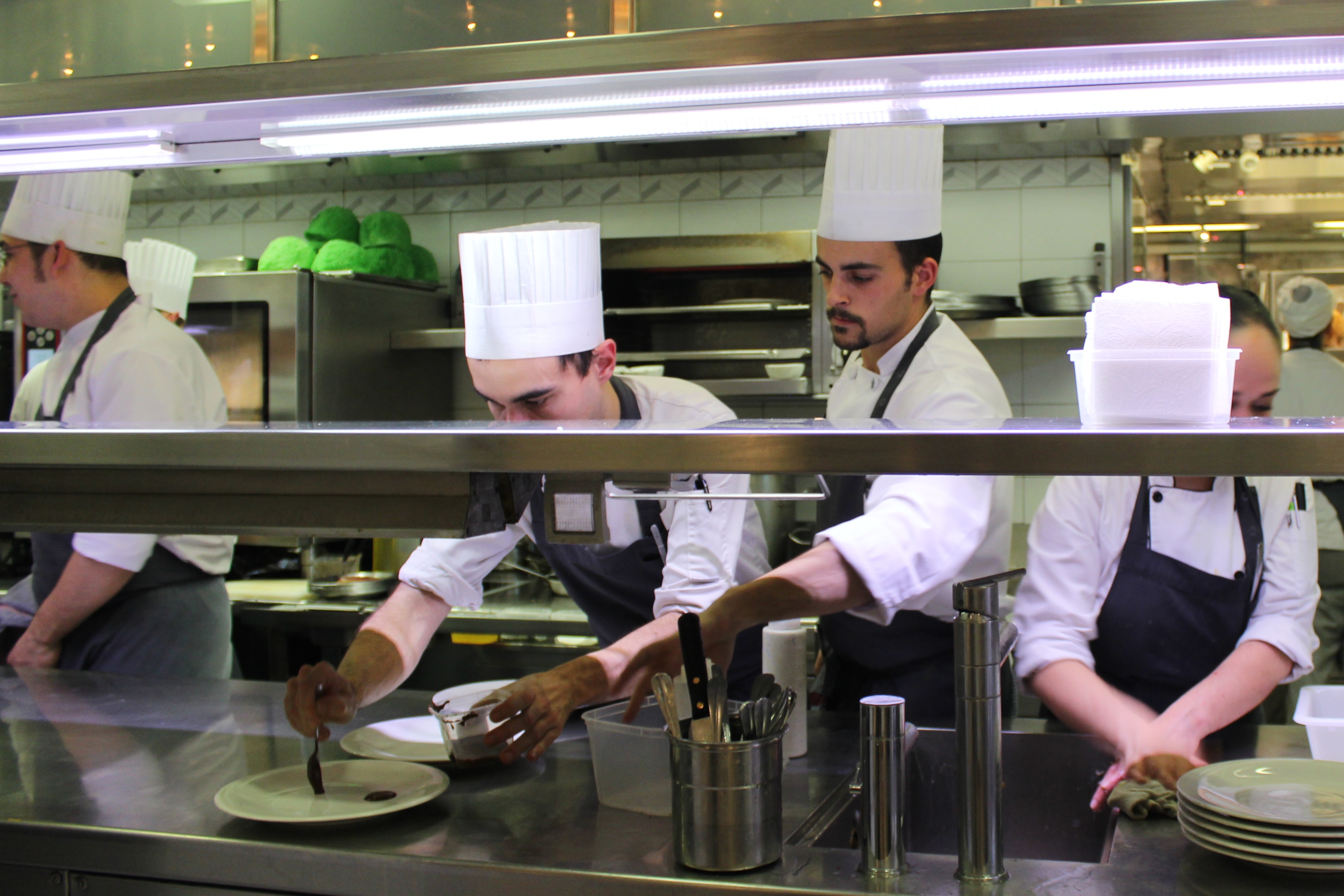 After that, the sommelier asked whether we wanted to check out their magnificent wine cellar. This is when Chris blurted out “Oh Hell Yeah.” It was now his moment to geek out.

And magnificent it was. Without a doubt, the Arzak wine cellar is home to some of the world’s most incredible bottles, including their own blends. Some of the wines we had with our meal included:

How do I describe this experience without being completely crass but brutally honest? This was a wine snob’s wet dream. 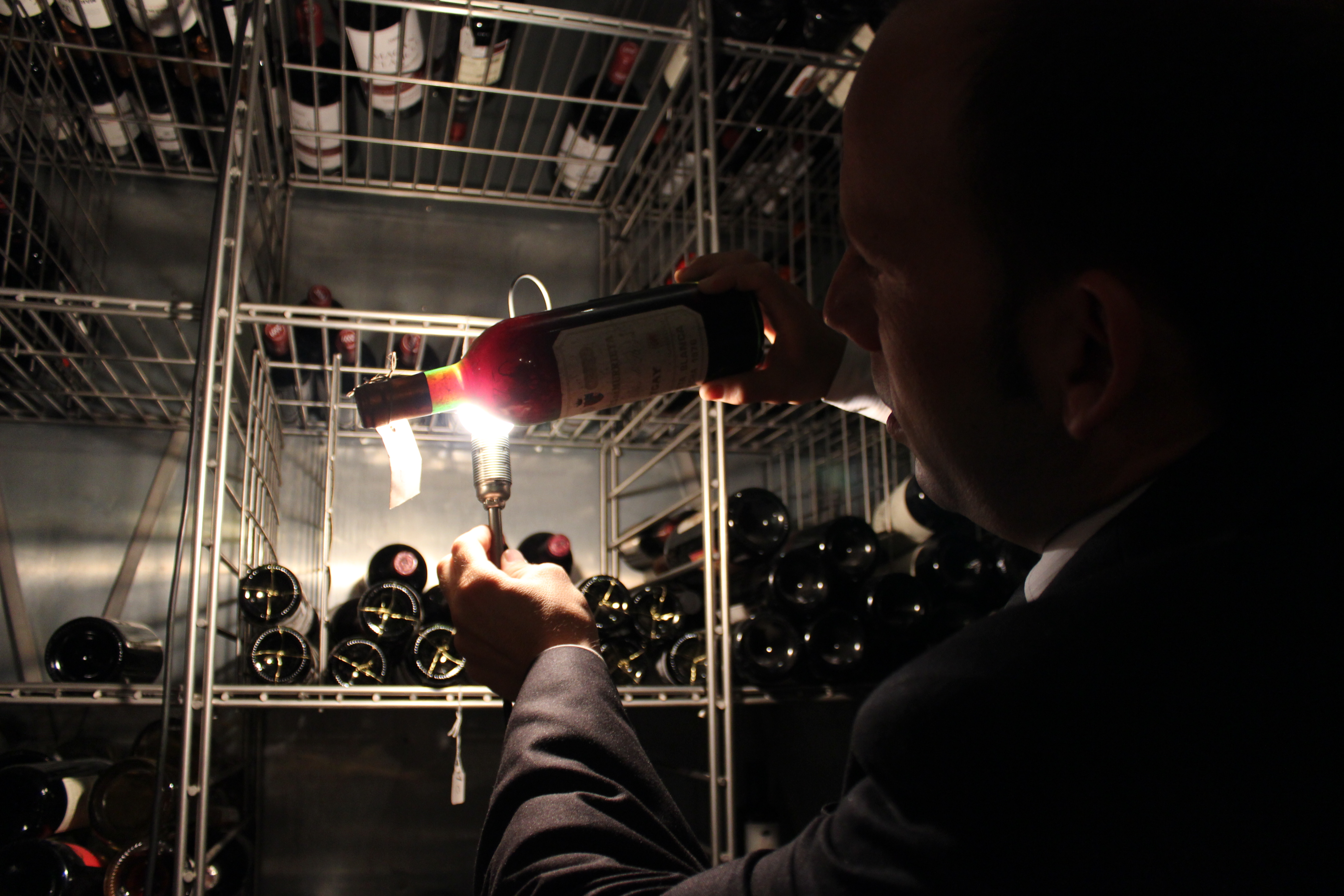 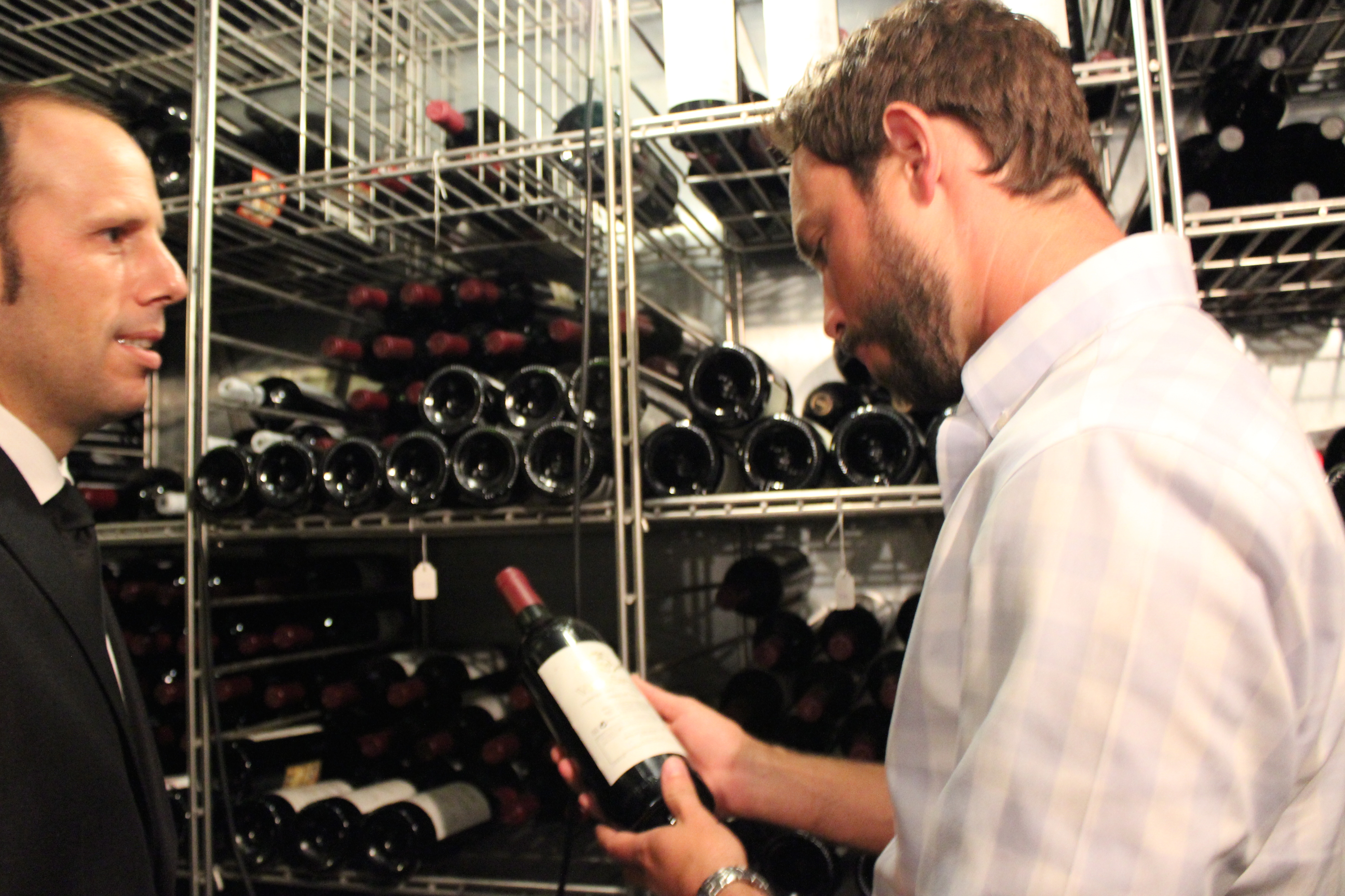 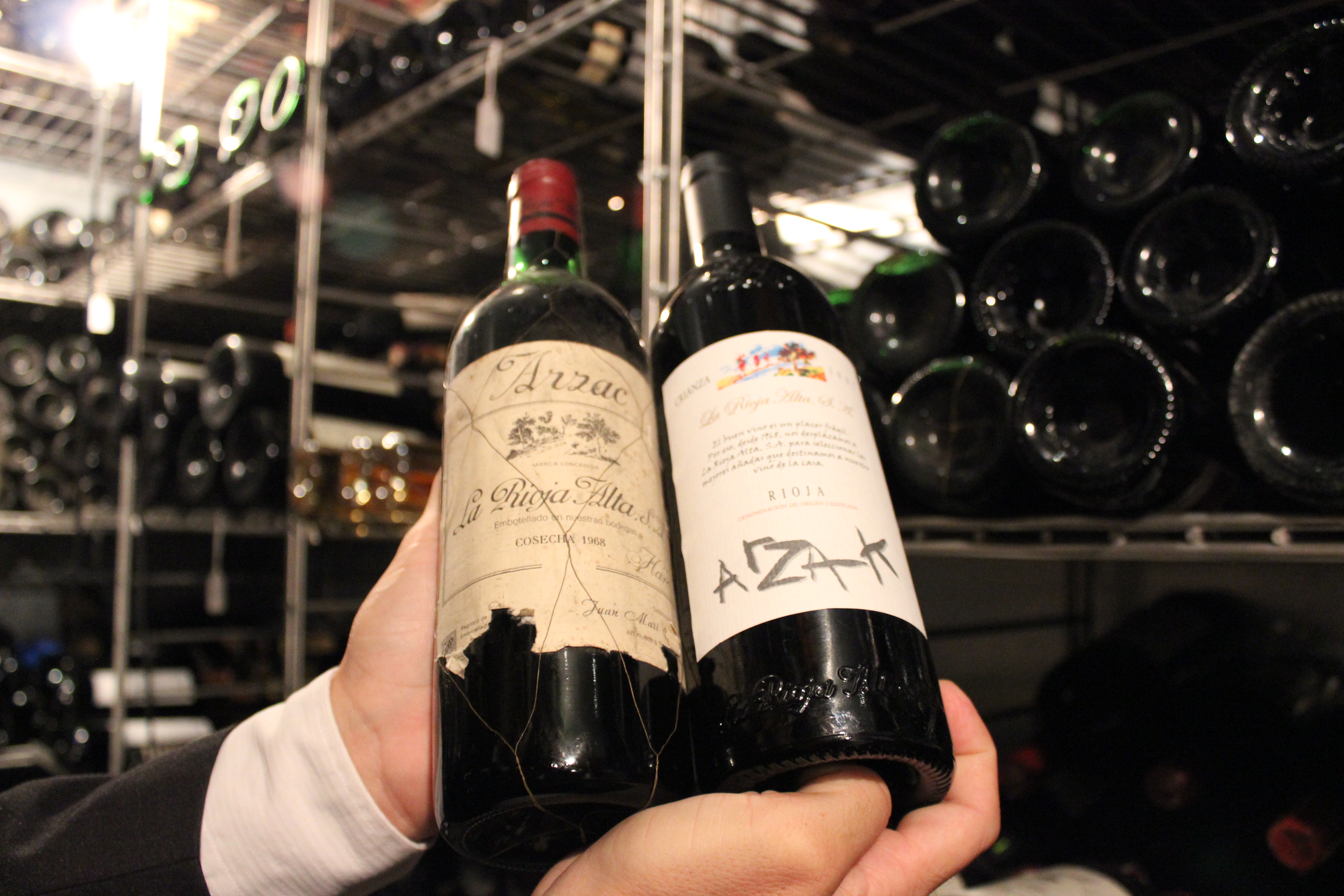 Although it was cold and dark, it was a place we didn’t want to leave. But alas, we had to get back to our meal. When we exited the wine cellar, there he was. Juan Mari. The Godfather of food. Although we spoke poor Spanish, and he didn’t speak very much English, he was all in for hugs and kisses. He did tell Chris that I was very beautiful and he was a lucky man. Chris agreed. What. A. Charmer. 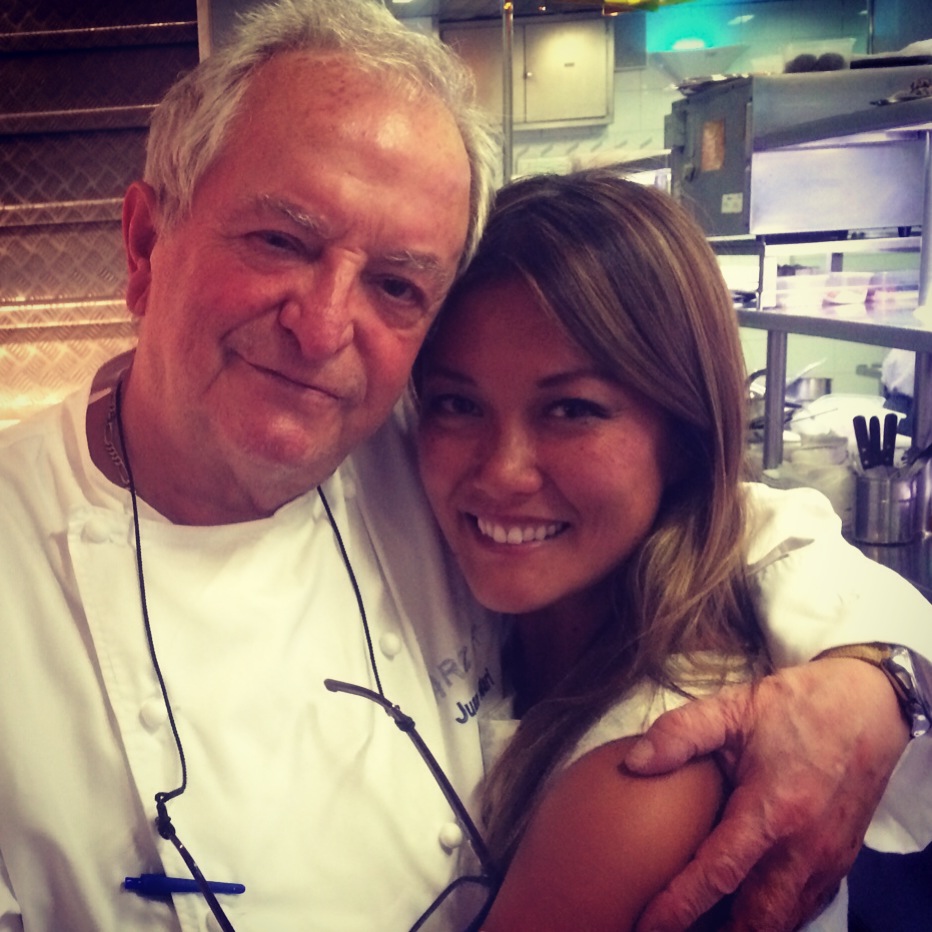 After our encounter with the Arzaks, we were taken back upstairs to dive into dessert.

For the wine pairing, an incredible Noe sherry. I’m not into sweet wines, but this was magnificent.

And with the wine, came the Big Chocolate Truffle. It was like a volcanic chocolate eruption in my mouth. If Marie Antoinette had actually said “Let them eat cake” this is the cake she was referring too.

And here it is, Elena’s muse. The black Persian lemon. She mimicked the hard black lemon rind with a chocolate shell that you break apart with a spoon. You could see a clear distinction of the layer of white bitter rind and the creamy citrus center.  So epic. 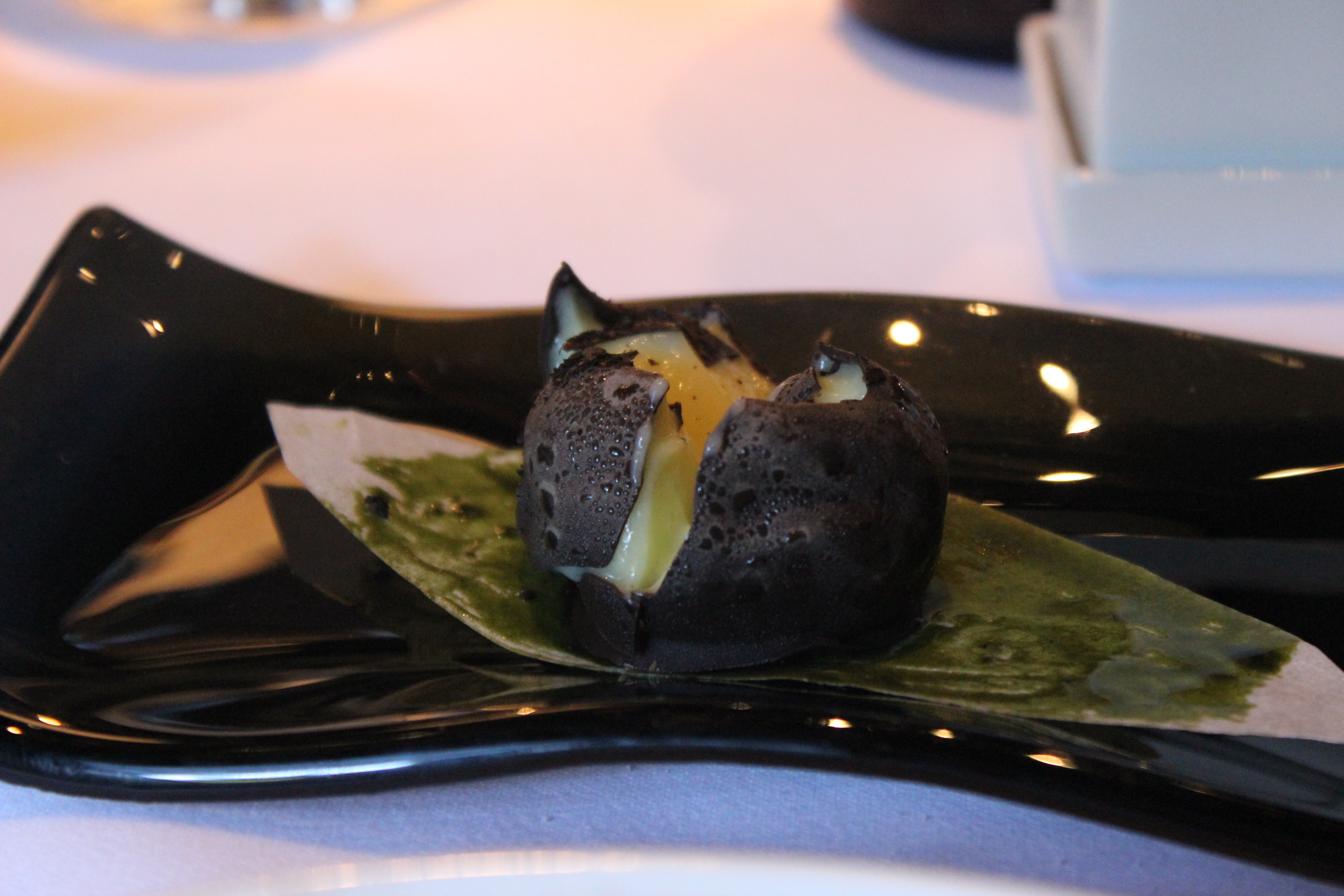 And to end the meal, chocolate keys, bolts and cocaine. Is cocaine gluten-free? Whatever, I don’t care. I’m eating it.

So that’s it. The meal came to an end. The cost? Very expensive. But a the experience was worth a thousand times that. 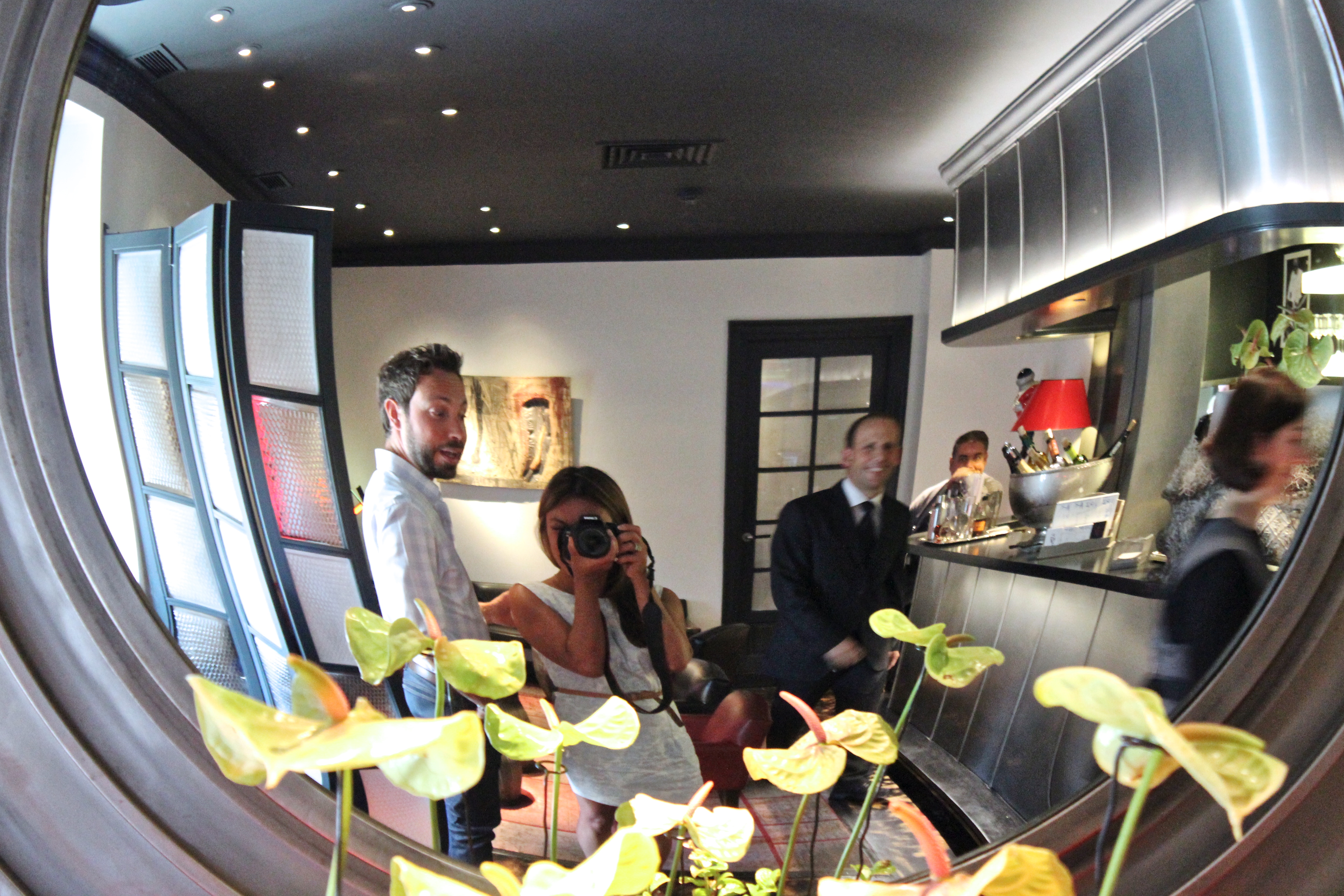 So in conclusion, pack your carry-on and visit San Sebastian. I mean like, right now. Hurry. And don’t forget to make your reservation here.
Adiós, I’m out.